This page is about Victoria, B.C. It is the capital city of British Columbia. Located on the southern tip of Vancouver Island, Victoria is a major tourism destination seeing more than 3.65 million visitors a year who inject more than one billion dollars into the local economy. Victoria is a cruise ship port where cruise liners stop at Ogden Point terminal. The city also receives economic benefits from its close proximity to Canadian Forces Base Esquimalt, the Canadian military’s main Pacific naval base.

Prior to the arrival of the Europeans in the late 1700s, the Victoria area was home to several communities of Coast Salish peoples, including the Songhees. The Spanish and British took up the exploration of the northwest coast of North America beginning with the voyage of Captain James Cook in 1776, although the Victoria area of the Strait of Juan de Fuca was not penetrated until 1791. Spanish sailors visited Esquimalt Harbour (within the modern Capital Regional District) in 1790 and again in 1792. Erected in 1843 as a Hudson’s Bay Company trading post on a site originally called Camosun (the native word was “camosack”, meaning “rush of water”) known briefly as “Fort Albert”, the settlement was later christened Fort Victoria, in honour of Queen Victoria. The Songhees established a village across the harbour from the fort. The Songhees’ village was later moved north of Esquimalt. When the crown Colony of Vancouver Island was established in 1849, a town was laid out on the site and made the capital of the colony. The Chief Factor of the fort, James Douglas was made the second governor of the Vancouver Island Colony (Richard Blanshard was first governor, Arthur Edward Kennedy was third and last governor), and would be the leading figure in the early development of the city until his retirement in 1864. With the discovery of gold on the British Columbia mainland in 1858, Victoria became the port, supply base, and outfitting centre for miners on their way to the Fraser Canyon gold fields, mushrooming from a population of 300 to over 5000 literally within a few days. In 1866 when the island was politically united with the mainland, Victoria remained the capital of the new united colony and became the provincial capital when British Columbia joined the Canadian Confederation in 1871. Victoria was incorporated as a city in 1862. In 1865, Esquimalt was made the North Pacific home of the Royal Navy, and remains Canada’s west coast naval base.

In 1886, with the completion of the Canadian Pacific Railway terminus on Burrard Inlet, Victoria’s position as the commercial centre of British Columbia was irrevocably lost to the City of Vancouver. The city subsequently began cultivating an image of genteel civility within its natural setting, an image aided by the impressions of visitors such as Rudyard Kipling, the opening of the popular Butchart Gardens in 1904 and the construction of the Empress Hotel by the Canadian Pacific Railway in 1908. Robert Dunsmuir, a leading industrialist whose interests included coal mines and a railway on Vancouver Island, constructed Craigdarroch Castle in the Rockland area, near the official residence of the province’s lieutenant-governor. His son James Dunsmuir became premier and subsequently lieutenant-governor of the province and built his own grand residence at Hatley Park (used for several decades as Royal Roads Military College, now civilian Royal Roads University) in the present City of Colwood.

A real estate and development boom ended just before World War I, leaving Victoria with a large stock of Edwardian public, commercial and residential structures that have greatly contributed to the City’s character. A number of municipalities surrounding Victoria were incorporated during this period, including the Township of Esquimalt, the District of Oak Bay, and several municipalities on the Saanich Peninsula. Since World War II the Victoria area has seen relatively steady growth, becoming home to two major universities. Since the 1980s the western suburbs have been incorporated as new municipalities, such as Colwood and Langford.

Greater Victoria periodically experiences calls for the amalgamation of the thirteen municipal governments within the Capital Regional District. The opponents of amalgamation state that separate governance affords residents a greater deal of local autonomy. The proponents of amalgamation argue that it would reduce duplication of services, while allowing for more efficient use of resources and the ability to better handle broad, regional issues and long-term planning.

The landscape of Victoria was molded by water in various forms. Pleistocene glaciation put the area under a thick ice cover, the weight of which depressed the land below present sea level. These glaciers also deposited stony sandy loam till. As they retreated, their melt water left thick deposits of sand and gravel. Marine clay settled on what would later become dry land. Post-glacial rebound exposed the present-day terrain to air, raising beach and mud deposits well above sea level. The resulting soils are highly variable in texture, and abrupt textural changes are common. In general, clays are most likely to be encountered in the northern part of town and in depressions. The southern part has coarse-textured subsoils and loamy topsoils. Sandy loams and loamy sands are common in the eastern part adjoining Oak Bay. Victoria’s soils are relatively unleached and less acidic than soils elsewhere on the British Columbia coast. Their thick dark topsoils denoted a high level of fertility which made them valuable for farming until urbanization took over.

Victoria has a temperate climate that is usually classified as Marine west coast (Cfb), with mild, damp winters and relatively dry and mild summers. It is sometimes classified as a Mediterranean climate (Csb).

Victoria’s equable climate has also added to its reputation as the “City of Gardens”. With its mild temperatures and plentiful sunshine, Victoria boasts gardens that are home to many plant species rarely found elsewhere in Canada. Several species of palms, eucalyptus, and even certain varieties of bananas can be seen growing throughout the area’s gardens. The city takes pride in the many flowers that bloom during the winter and early spring, including crocuses, daffodils, early-blooming rhododendrons, cherry and plum trees. Every February there is an annual “flower count” in what for the rest of the country and most of the province is still the dead of winter.

Due to its mild climate, Victoria and its surrounding area (southeastern Vancouver Island, Gulf Islands, and parts of the Lower Mainlandand Sunshine Coast) is also home to many rare, native plants found nowhere else in Canada, including Quercus garryana (Garry oak), Arctostaphylos columbiana (Hairy manzanita), and Canada’s only broad leaf evergreen tree, Arbutus menziesii (Pacific madrone). Many of these species exist here at the northern end of their range, and are found as far south as Central and Southern California, and even parts of Mexico.

Total annual precipitation is just 608 mm (24in) at the Gonzales weather station in Victoria, contrasted to nearby Seattle, (137 km/85 miles away to the southeast), with 970mm (38in) of rainfall, or Vancouver, 100 km away, with 1,219 mm (48 in) of rainfall. Perhaps even more dramatic is the difference in rainfalls on Vancouver Island. Port Renfrew, just 80 km from Victoria on the wet southwest coast of Vancouver Island receives 3,671 mm (145 in). Even the Victoria Airport, 25 km north of the city, receives about 45 per cent more precipitation than the city proper. One of the most striking features of Victoria’s climate is the distinct dry and rainy seasons. Nearly two thirds of the annual precipitation falls during the four wettest months, November to February. Precipitation in December, the wettest month (109 mm/4 in) is nearly eight times as high as in July, the driest month (14 mm/0.5 in). During the summer months, Victoria is the driest major city in Canada.

Victoria averages just 26 cm (10 in) of snow annually. Every few decades, Victoria receives very large snowfalls, including the more than 100 cm (39 in) of snow that fell in December 1996. On the other hand, roughly one third of winters will see virtually no snow, with less than 5 cm (2 in) falling during the entire season. When snow does fall, it rarely lasts long on the ground. Victoria averages just 2-3 days per year with at least 5 cm (2 in) of snow on the ground.

The rain shadow effect also means that Victoria gets more sunshine than surrounding areas. With 2,223 hours of sun annually, Victoria is one of the sunniest places in British Columbia, and gets more sunshine than most other cities in Canada except those in the southern Prairies. The benefits of Victoria’s climate are evident through the city’s gardens, which are more likely to display drought-tolerant oak trees, eucalyptus, arbutus, and even bananas, than they are likely to feature evergreen conifers, which are typically associated with the coastal Pacific Northwest environment.

Other city districts often regarded as neighbourhoods include:

Major towns and villages in Greater Victoria and area

The city’s chief industries are technology, tourism, education, federal and provincial government administration and services. Other nearby employers include the Canadian Forces (the Township of Esquimalt is the home of the Pacific headquarters of the Canadian Forces Maritime Command), and the University of Victoria (located in the municipalities of Oak Bay and Saanich). Other sectors of the Greater Victoria area economy include: investment and banking, online book publishing, various public and private schools, food products manufacturing, light aircraft manufacturing, technology products, various high tech firms in pharmaceuticals and computers, engineering, architecture and telecommunications.

The May 24, 2007 edition of the Victoria Times-Colonist newspaper reported that for the first time in Victoria history, high technology has overtaken tourism as the top performing economic sector in Greater Victoria. A gala awards event was staged at the Victoria Conference Centre for business executives and companies that achieved excellence in their respective fields.

The Victoria Region is experiencing a booming real estate economy. The labour shortages and high cost of housing seem to mirror the economic trends of other booming Canadian cities such as Vancouver, Edmonton and Calgary.

The Port of Victoria consists of three parts, the Outer Harbour, used by deep sea vessels, the Inner and Upper Harbours, used by coastal and industrial traffic. It is protected by a breakwater with deep and wide opening. The port is a working harbour, tourist attraction and cruise destination. Esquimalt is also a well-protected harbour with large graving dock and shipbuilding and repair facilities. 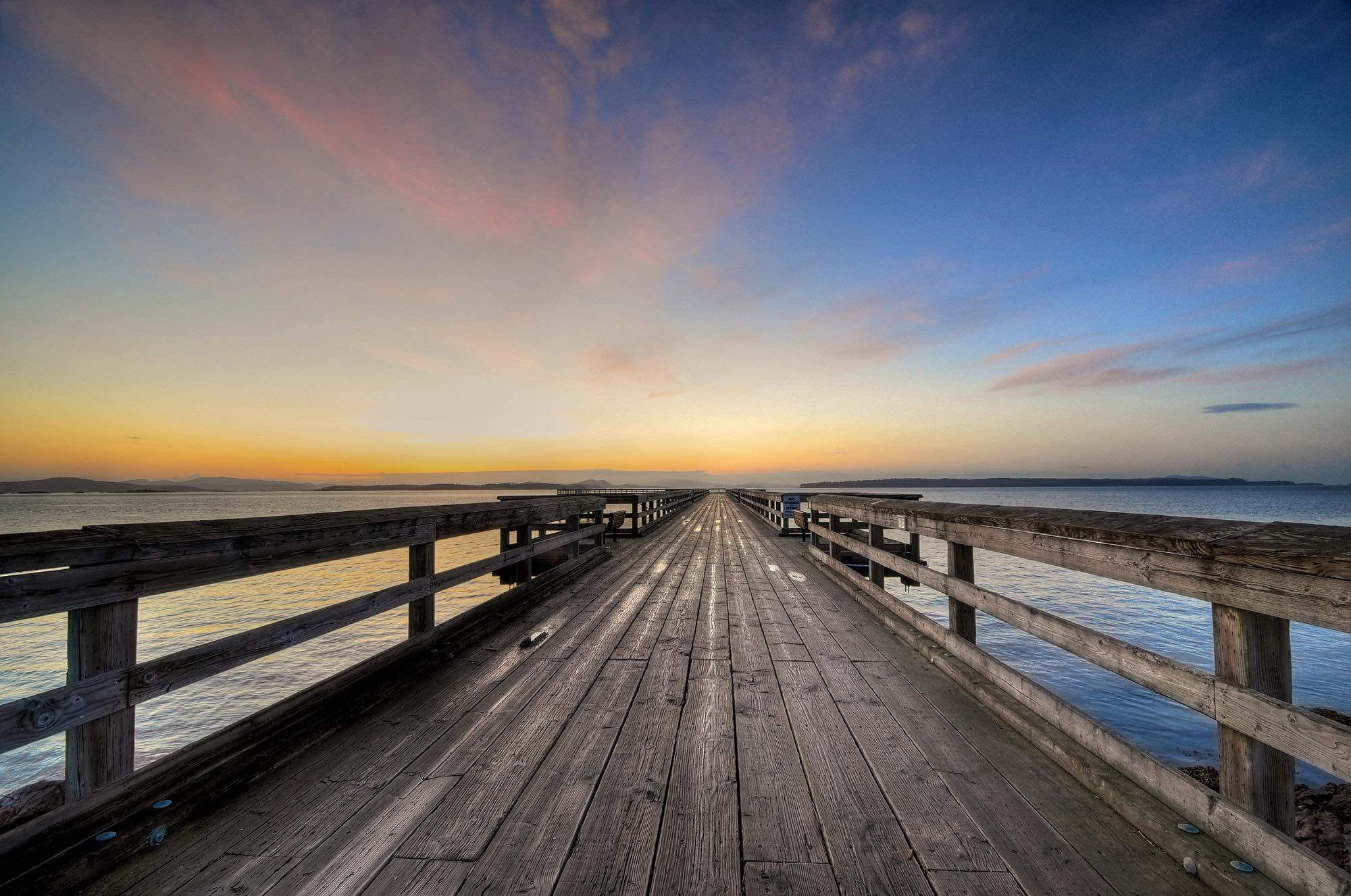 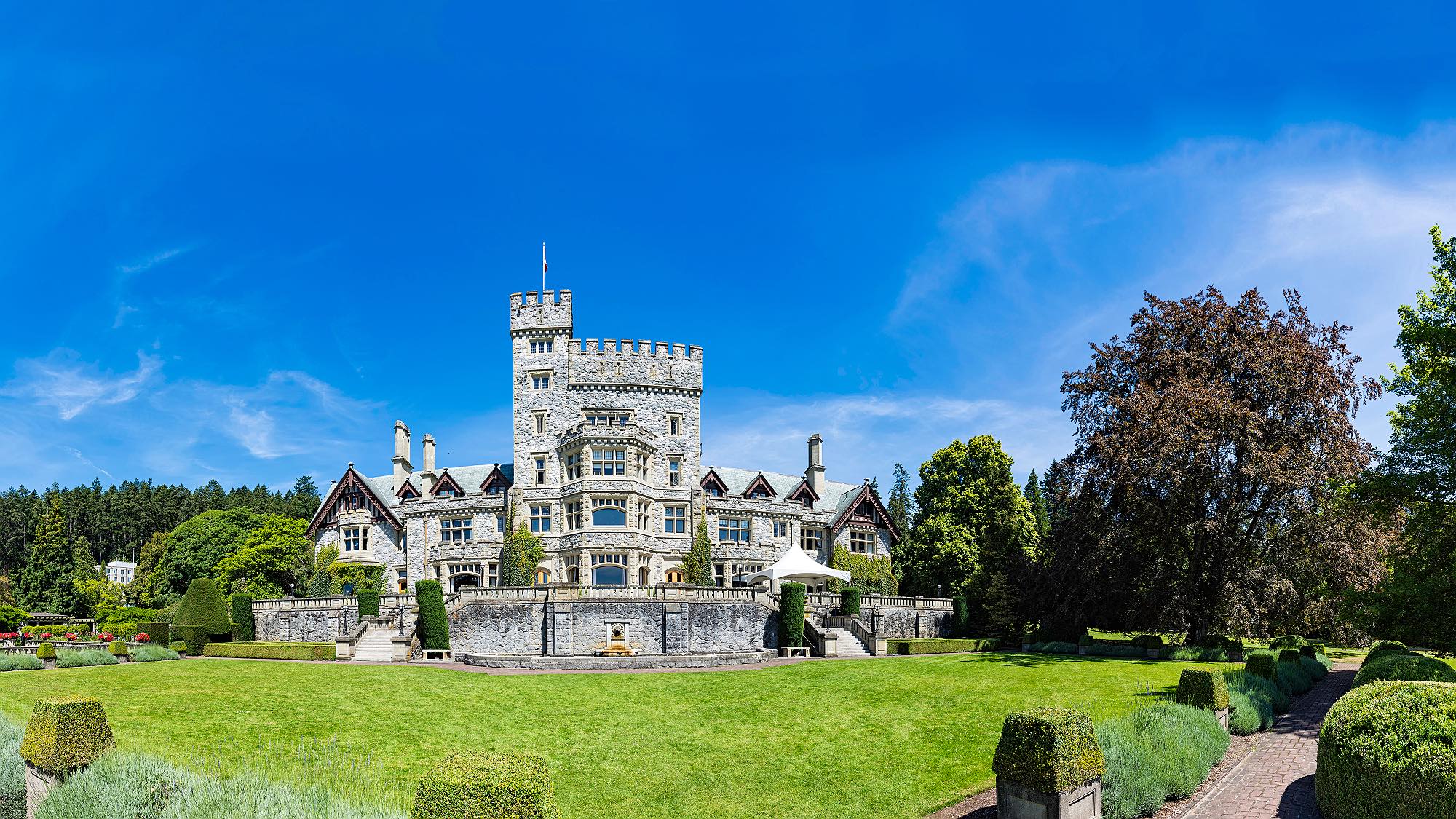 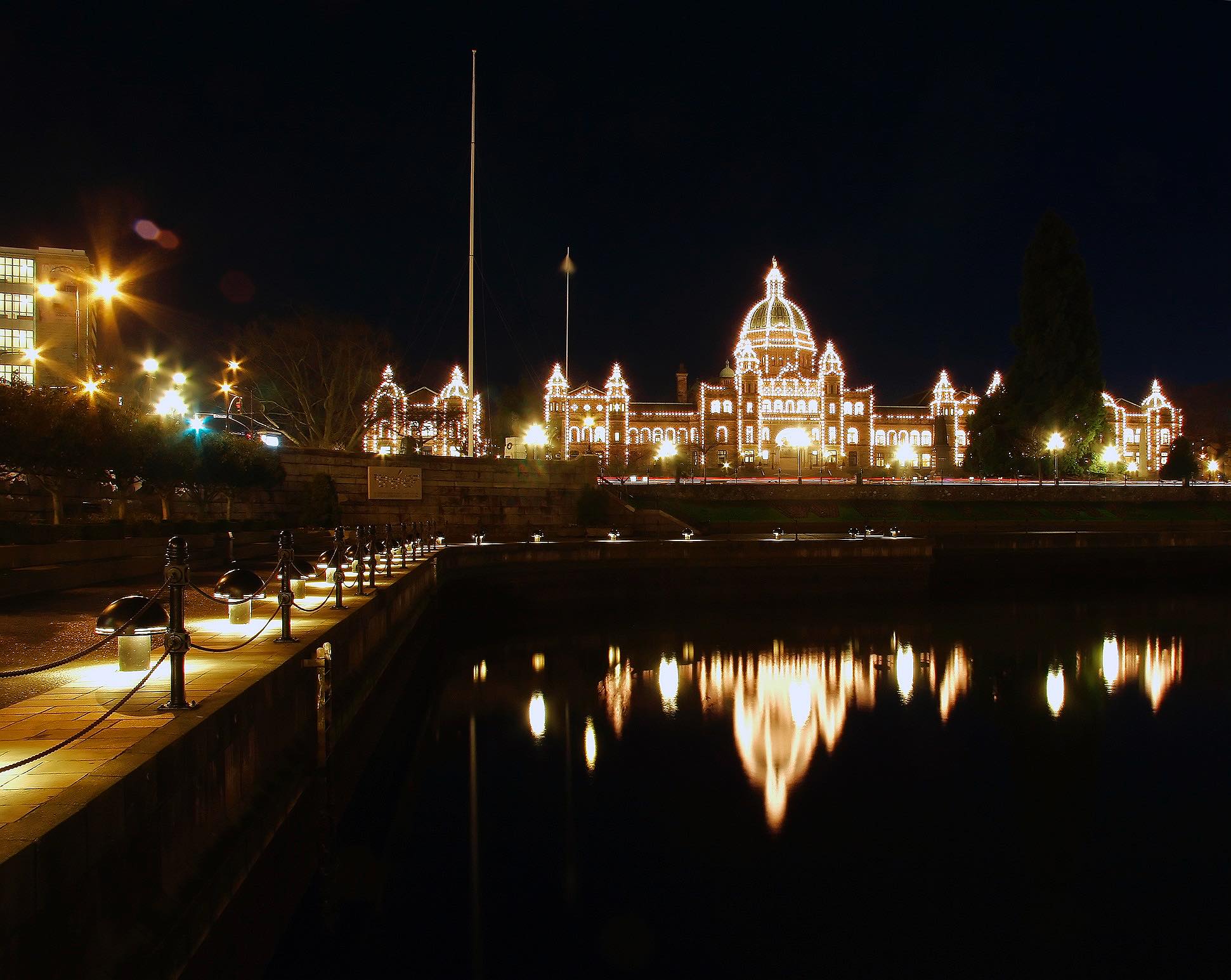